How to Clean a Stubborn Swiss Army Knife 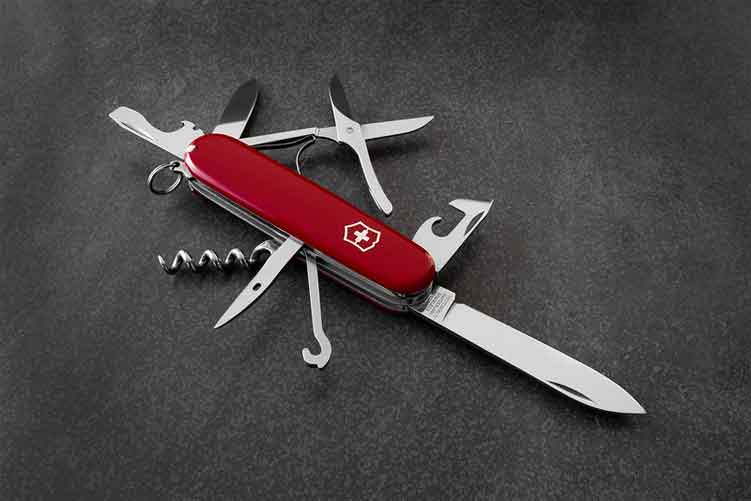 If you’ve had a Swiss Army knife for a while, you’ve probably run across this problem at least once: you go to pull out the knife’s blade, bottle opener, screwdriver, whatever (compass, wire stripper, fish scaler, etc., etc.) and it’s stuck. You nearly break your finger trying to pull the tool out.

It’s embarrassing, especially when you’re using the Swiss Army knife in an attempt to look suave at a party (Guys, you know what I’m talking about: “Hey there, gorgeous, need a bottle opener? I can help you out — err –Hmm. Hang on a second. Argh–[much more struggling and grunting ensues; attractive female slowly backs away]”).

So, obviously, you need to take care of your Swiss Army knife. Keep it clean and keep it oiled. Sure, it’s embarrassing when you can’t open your future girlfriend’s Corona because of a stuck knife, but it’s downright life-threatening when you need to make a bomb out of a Hershey chocolate bar and a toothpick, MacGyver-style, and you can’t open up the wire stripper (or whatever MacGyver would use to do that).

So here are three easy tips to keep your Swiss Army knife ready to use at any time.

First, make sure you have a genuine Swiss Army knife. That means it’s made by Victorinox or Wenger, the two leading Swiss Army knife makers. Don’t buy an inferior multi-use knife just because it’s cheaper. In my experience, the cheaper knives get stiff and stuck much more often, click over here.

When the knife starts to get stiff, wash it in your dishwasher. This is the easiest way to clean it. It’s much simpler than running it under a tap or rubbing it with a cloth. Simply open up all of the tools of the knife and put it in the utensils holder. If you can’t get all of the tools folded out, don’t worry about it. If you don’t have a dishwasher, try soaking the knife in hot water for a couple of hours. That will probably do the job also, but it won’t be quite as effective.

Finally, put a few drop of oil on the outsides of the hinges. I use 3-in-One Oil. You can find it at most hardware stores. Wal-Mart carries it, too. Just a drop or two at each end of the knife should be fine. If you overdo it, you’ll have to wash the knife again, because it’s hard to wipe off the extra oil. This oil works like a charm on Swiss Army knives.

There you have it! Regular cleaning and maintenance of your knife will keep it working for years or even decades. And, the next time you try to be smooth at a party, you won’t fall flat on your face.